Please (neglect to) Nominate Me For This Prestigious (non-)Award! A few days ago, I was contacted by a marketing person for something called The National Quilters Circle. He informed me that this circle thing is holding blogger awards and that my blog had come up several times in nominations, presumably for Most Humorous Blog. He thought that I might want to encourage my readers to go and nominate me in this category, so that I can win the coveted title and lord it over all the other quilting humor blogs out there. When quilting humorists get together, I can wear my 2015 National Quilters Sphere Most Humorous Blog Award Winner t-shirt that I will totally have to make myself because they don't actually provide such a thing to the winners, and I can puff out my chest, where the logo is located, and be all, "Do YOU have a 2015 National Quilters Rhomboid Quadrilateral Most Humorous Blog Award Winner t-shirt? NO YOU DON'T." And then that one blogger will rip off her jacket, revealing her own self-made t-shirt and then we'll have to take it outside where I will most definitely mess her up because mama don't play.

So you can see why one might think I would be keen to win such a thing. Now, these contests have come up before, and I have on occasion half-heartedly posted a link on Facebook and suggested that maybe if people had nothing better to do they might want to think about going and nominating me. And a small handful of people always responds. But I have never actually gone on my blog and begged for nominations and votes. BUT NO MORE. Today I stand before you, my hat in my hand, my heart on my sleeve, my Cheetos on their way to my mouth because it's totally snack time, and I entreat you: please go to the National Quilting Illuminati Triangle and nominate my humble little blog for Most Humorous Quilting Blog.

The National Quilters Circle is not a circle of any kind unless you are familiar with the Italian poet Dante. It is the brainchild of a company called TN Marketing, and they specialize in something called "affinity content marketing." The basic idea is that they develop and host video content related to something in which a large number of like-minded people might be interested, such as quilting or recreational dishwasher repair. In fact, the National Quilters Circle is a thing this marketing company came up with themselves. They were not hired by quilters to do this. They also came up with "The Woodworkers Guild of America" (which is not a guild of any kind) and "The Personal Defense Network" (which is not a network of any kind). All of these sites are built on the same platform: there are free videos and there are "premium" videos. You become a paid member in order to access the "premium" videos, and this can be paid as a monthly or a yearly fee. There's a blog. And a couple items thrown into a store for sale, mostly DVDs and more portals for the "premium" service. That's it.

In addition, I looked at some of the free videos, and I immediately noticed something. A couple years ago, DailyCraftTV.com (itself a part of Fons and Porter and which I don't even think still exists) asked me to review their site, and I got access to a video of my choice. I took screenshots of some of the videos and they were all filmed in this same little studio: 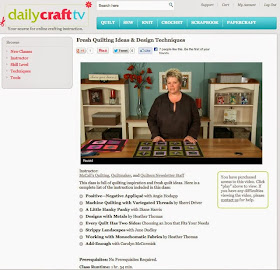 Now check out the background (and the teacher!) of this free video from That National Quilters Circle: 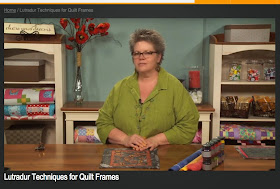 Now, I can't imagine a marketing firm being willing to actually set-up, film, and produce quilting videos themselves; it wouldn't be cost-effective. So, they have to get the content from somewhere—perhaps a place that already produces and markets videos and has extra ones on hand to sell or one that couldn't make their own paid content business model work and can sell it off to another company who wants to try to make a go of it.

None of this is secret and took me literally five minutes of internet clicking to figure out.

Now, before the rabid Randian capitalists among you start calling for my head, let me just say this: I do not care that this company is trying to make money. We're all trying to make money in some fashion. And in an economy that is becoming more and more internet-based, people have to be a bit more creative about how they make that money. I get that. But I also have this old-fashioned streak in me that thinks selling stuff should ideally be a little more straightforward. I have stuff to sell. I hope to have more stuff to sell fairly soon. When I do, I will show you my stuff, and direct you to the place or places where you can purchase it if you wish. If you buy my stuff, it helps my family and keeps me off the streets so I can keep writing goofy shit on the internet for you to enjoy. It's the Circle of Life. But I'm not going to suggest via a cleverly crafted name that buying my stuff makes you a member of some elite club. And I can be totally open about where the stuff I'm selling comes from: me. When The Bitchy Stitcher pops up on your Facebook feed, it's just me. And there's lots of us out there trying to honestly make a buck or two without having to resort to weird branding schemes to do it.

I don't want you to march over to their Facebook page and loudly declare that you will not be taken in by such schemes. I'm not looking for anyone to write nasty emails or blog comments. I just want to help you be a little more aware as a consumer of stuff and content on the web just how often you are being marketed to in this way. If I had just posted a link to The National Quilting Circle blog nominations page, would you have looked a little deeper? Would you have looked up the url for the website (which is different from the blog nominations page) and scrolled down to read all the About Us and Contact Us and Terms of Service info that would, if you paid attention, lead you to the name of the marketing company that runs it and then to their website which declares that they made this up themselves? If you shared a link from someplace called The National Quilting Circle, wouldn't it feel as though you were linking to something produced by a prestigious organization on par with AQS? Of course it would—that's the point.

If the videos obtained by and now sold by this marketing firm are genuinely helpful and good and worth your dollars, then spend and view in good health! There is absolutely nothing wrong with having a commodity to sell and nothing wrong with buying it if you want it. There's nothing wrong with companies using this firm to help them market themselves via video content. I just hope that the next time you see a contest, a Facebook page, an ad for something that calls itself a circle or a club or a network, take the five minutes it took me to do some Googling and read some fine print to see what it's really all about.  That exclusive group you just joined might really be a group of marketing execs hoping you'll hand over your credit card info after giving them some free advertising.

But remember: if it's a Movement, you totally want to join that shit. 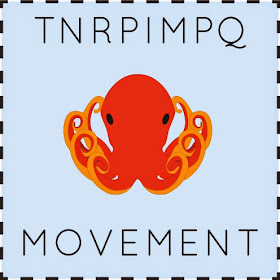